Over the past 30 years, an undercurrent of developments has been happening in our world of communication. This change has started affecting our daily lives, which we can notice by the flood of enhanced communication devices that have reduced the terrestrial distances. Transmission of large amounts of information/data over vast distances with extreme clarity and reliability is real now.

The use of light for communication obviously is not a new thing for Homo sapiens. Light has been used to communicate since the earliest recorded history. Earlier communication using light was slow and the techniques employed were not sophisticated, and the communication has been limited by climatic conditions.

Ancient Greeks, Phoenicians, Chinese, and Indians reflected the light on mirrors or shining objects to send specific signals that only their group members could decode. Sunlight is replaced by artificial light and over a period of time ON/OFF switches were introduced, but the overall concept remained the same. Some military ships use a kind of variation of this old technique for low-speed communication.

Alexander Graham Bell developed a photophone to send voice signals over the light beam. In his photophone sunlight was reflected off a mirror that vibrated to voice sound waves. He placed a photocell, which was the receiver, and connected it to an electric circuit that finally connected to a speaker. He could successfully send the signal and the ideas were good, but the technology was not put in place practically. 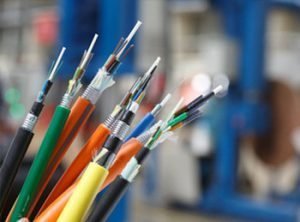 The scientific community continued its effort to develop glass fiber that guides the light. The first low loss glass optical fiber was developed in 1970. Commercial manufacturing of 250-micrometer diameter fibers was done at Corning factory and the first fiber optic cable was made in the mid of 1970s. Many telecommunication companies started using optical fibers for shorter distance communication. Many companies started the refinement of optical glass fiber technology that eventually lead to the use of optical fibers for long-distance communication.

There was no looking back since then for the fiber optic industry. From 1980, fiber optics gained popularity in the telecommunications world and has reached to the status of a widely accepted and proven technology today. Replacement of copper wires with the optical fiber cable is the new norm.